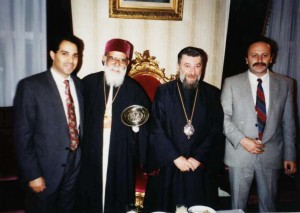 To me, the articulation of several clear theological positions seems an eminently worthwhile project. I think our movement has sufficient stability and flexibility to permit such differing positions to continue to be refined in the light of mutual discussions, thus contributing to greater understanding of each other’s traditions.

What is even more important, from my perspective, is the impact that our work for peace has, and should have, on our theology. It is hardly possible for us to continue collaborating with all men of good will in the work of peace and yet not be led to review our own understanding of the Gospel of Jesus Christ. Much of our understanding of the Gospel is conditioned by the feudal or bourgeois – individualist socio-economic context in which several of these understandings have been shaped. I can only indicate here three of the crucial areas where such a reinterpretation of the Gospel is called for:

1. The Gospel of the Kingdom of God, which begins by calling a special people together, is fundamentally a social movement, and only secondarily a message of salvation to individual persons. It is the New Man in Christ that is proclaimed in the Gospel and this New Man is a social reality. While there are elements in the New Testament which can be used for an individualistic interpretation of salvation in Jesus Christ, we must take into account the fact that over-emphasis on personal salvation is a special feature contributed by the individualism of the bourgeois capitalist competitive free-enterprise ideology. We need to reinterpret the Gospel in such a way that personal salvation is put in Its proper social context. Baptism is not just for individual regeneration – it is, in fact, initiation into the community of faith and identification with the life of Jesus Christ who lives for all human beings. To believe in Jesus Christ is to be done with the concern about saving one’s own soul, and to begin our lives in Christ for the sake of the redemption of all humanity.

Such a fresh interpretation should not, as the American Social Gospel once did, seek to deny all reference to eschatological and personal salvation. It need not shy away from the teaching of the Church about the significance of the death and resurrection of our Lord Jesus Christ as the American Social Gospel was tempted to do under the influence of German liberalism. We can do full justice to the personal element in salvation and to be meaning of the sacrament of baptism, by placing both in the context of a social and cosmic understanding of the Gospel.

2. The aversion to the material aspects of human existence and the over-spiritualization, over-individualization and over-eschatologization of the Gospel have their roots in a failure to grasp the cosmic dimensions of the Gospel of Jesus Christ. The false opposition between matter and spirit can be traced to a failure to grasp the meaning of the Incarnation and even of Creation. Matter is good because it is created by God. Materialism cannot be opposed to spiritualism. Matter and spirit are both aspects of the same Good Creation, and both come within the purview of God’s Creation, of the saving work of Jesus Christ, of the final fulfilment of all in Christ.

It is this aversion to material reality that is at the root of the Church’s alienation from the realities of historical existence and its frequent attempts to retreat into an over-eschatological other-worldliness or an acosmic and individual existentialism in its understanding of salvation.
At the same time I do not want to fall into the trap into which the WCC’s missionary Conference at Bangkok fellnamely of seeing salvation almost entirely in highly superficial this-worldly experiences of liberation. It should be possible for us to develop an adequate re-interpretation of the Gospel which keeps the four-fold cross – dialectic of reality in proper balance – the eschatological-historical as one arm of the dialectical cross, and the matter-spirit dialectic as the other arm of the cross. Only such a cross-dialectic can do justice to the immense richness and depth of the Christian Gospel, and at the same time enable us to see the social revolutions of history and the material achievements of humanity as having their own significance in the onward march of Creation towards its Godgiven destiny.

In the light of the questions raised by the limits-to-growth debate and by the ecological crisis as well as of the new question being raised everywhere about the role of our kind of science and technology in limiting our perception of reality, a fresh theology with the cross-dialectic interpretation of reality may prove itself to be capable of providing new approaches to the creation of new forms of civilization which are more human.
3. The third aspect of a re-interpretation of the Gospel has to do with the understanding of the role of the Church in the economy of salvation. The temptation has long been with us to regard the Church as the ark of salvation, outside which the work of Jesus Christ is of no impact at all. Ever since Cyprian of Carthago made that fatally misunderstood statement about extra ecclesiam nulla salus, made in a polemic context at a particular period of North African Christian history, Christians have been tempted to deny any redemptive activityof God apart from the Church. But Jesus Christ has by the incarnation become identified with the whole of humanity.

The Church’s role is a special and privileged one. It is called to share most intimately in Christ’s knowledge of God and his purposeful activity for the salvation of mankind. It has a privileged access to the mystery of God’s creatiGn. It lives only for the achievement and fulfilment of that purpose and seeks nothing for itself. It is not jealous about unbelievers benefiting from the fruits of redemption, but, on the contrary, is able to rejoice in the insight that God is at work in Christ and by the Holy Spirit, in the work of Creation, leading Creation to its destiny. Where unbelievers seek first the Kingdom of God and his righteousness, even without explicitly acknowledging faith in Jesus Christ, the Christian rejoices that God’s Kingdom is coming, and gladly stands shoulder to shoulder with all who are working for peace with justice.

The Church’s task is to spread the joy of Christ both by the proclamation of forgiveness in Jesus Christ and by working with all human beings of good will in the interest of peace with justice. Her task is to take all the good things that are happening anywhere in Creation and to lift them up in praise and thanksgiving to God. Her mission is to embody love of God in joyful identification with the oppressed and the poor. She becomes false when she becomes the supporter and beneficiary of the pockets of privilege and power in society and when she selfishly arrogates to herself all be benefits of God’s work for her own private enjoyment. The Church exists for Christ, and therefore for all humanity and for the whole of Creation.

(From the Address of Metropolitan Paulos Mar Gregorios delivered at the honorary doctor’s degreee being conferred upon him by the Lutheran Theological Academy In Hungary, 1975)