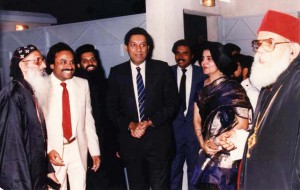 The issues of war and peace are again on the top of our agenda in India today.

What started out as peaceful war games in Pakistan and India suddenly took on the dimensions of a military confrontation. Those with inside knowledge feared imminent break out of war. There is no doubt indeed that it was in fact a massive confrontation of armed either side of the frontier.

We shoud be thankful that the leaders of the two nations showed considerable maturity. They combined mutual confrontation at the military level with peaceful mutual consultation at the civil service level. We are now told that the consultations have been successfully concluded. As of present writing troop withdrawals seem to have begun. Let us hope that sanity will always prevail over trigger-happy military madness.

A war between Pakistan and India, whoever wins in the end, can only be a disservice to both nations. It will serve only the interests of those who stand to gain from increased military expenditure and from the resulting defence contracts and arms sales.

How much did this confrontation cost the tax-payers in Pakistan and India? We will probably never be told. But we know that the cost runs into crores of rupees. If we were wiser we could probably have created thousands of jobs for the poor and the unemployed with that money. We could have built schools for the illiterate, organised health delivery programmes for the rural poor, provided drinking water and electricity for our suffering villages.

We who have been accusing the U.S.A. and the U.S.S.R. for heavy military spending, have now proved to be worse offenders in terms of the percentage of military expenditure in our national budgets.

And the secrecy that surrounds these military operations and costs force us into helpless ignorance of what is going on in our nations, of how many of our people die, of how our money is spent. War and war preparations can also be used, as we well know, for the curtailment of our civil liberties and human rights.

The one redeeming feature of the recent India Pakistan military confrontation has been as stated above,the willingness to sitdown together and negotiate at the level of governments even while hostile armies stood on both sides menacing each other. Here we have set a pattern for others – Iran – Iraq, USA – USSR, China – Vietnam, Israel – Arab nations, Libya – Chad, and so on. We have been able to come to a negotiated settlement for troop withdrawal, though not for lasting peace or reduction of forces and armaments.

The issue of a Pakistani nuclear bomb was used by India as a pretext. All of us know that India acquired nuclear war capability long before Pakistan did. Morally speaking, India has little ground for protesting against Pakistan’s developing the same nuclear capability. In terms of plutonium supplies, essential for nuclear weapons, our stockpile is probably many times larger than that of Pakistan.

It is clear that nuclear weapons cannot be used. They are good only for false prestige and deterrent might. Now that both India and Pakistan have achieved nuclear war capability, it is time that both of us together took some major initiatives for world-wide nuclear disarmament. If as Asian nations, we could get together with the other Asian nuclear power, namely the People’s Republic of China, we would probably get a better hearing in the global arena than we have hitherto been able to get.

Among the signs of hope in the international sphere we welcome the Soviet Union’s declared willingness to negotiate separately the withdrawal of Medium Range Missiles without tying them to the package deals talked about at Reykjavik.

What we need desperately today is a concrete beginning to nuelear disarmament. The withdrawal of Intermediate or Medium Range missiles would hardly constitute that first step. We need actual destruction of nuclear weapons by both sides. There are technical questions about the actual consequences of nuclear arms destruction. These are dependent on how they are destroyed. But not all the consequences can be predicted accurately now. There is the whole question of how the devices are to be detonated, how the nuclear fuel in these weapons is to be disposed of, how the delivery systems are to be converted to creative civilian use. Some things we will find out only after some devices have been actually disposed of.

Psychologically we are in urgent need of a first step in the reduction of these monstrous weapons – a substantial reduction, not just a token one.

It is common knowledge among the experts that neither the U.S.A. nor the U.S.S.R. needs even one-tenth of their present stockpiles of nuclear weapons and delivery systems to destroy each other or to ‘deter’ each other. Why not agree to a 50% reduction of all nuclear weapons – strategic, intermediate and theatre?

If the recent military confrontation would thus lead to a new agreement on the part of China, Pakistan and India (it would help if Pakistan had a democratically elected civilian government) to take some initiatives for global nuclear and conventional disarmament, the clouds of war over our frontiers now will turn into a real sign of hope – for peace.
What all of our nations of the earth need is an international system, democratically controlled by all nations, of common security. This will eliminate the need for military confrontations such as we have just had. It will also eliminate the need for nuclear and conventional forces and weapons.

Common security means moving beyond the principle of national sovereignty to a commitment to global humanity and to an international community of free nations responsible to each other. Common security will demand a high-technology international monitoring system. We have the technology for this. We can find out all about all nuclear tests, all war preparations, all deployment of arms and forces, through a central monitoring system. This system will have to be owned and democratically controlled by all nations together.

The structure of common security will also need mechanisms of resolving conflicts through peaceful means, supported by adequate power to enforce and implement its decisions. The United Nations will have to become a regular parliament of nations with authority in certain specific areas of international co-operation and conflict resolution. As the structure for common security develops, there should be an international treaty banning all nuclear weapons, all weapons in space, and all other weapons of mass destruction.

The National Council of Churches in India has just inaugurated a Peace Centre. Some of the above questions can be further formulated by the Centre for discussion in the Churches and other groups. Only that way the vision of a world without war, without weapons of mass destruction, with co-operation in science and technology, humanity’s common possession of space and the high seas can begin to become real.