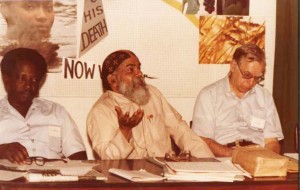 Religious differences have been a recurring pretext for wars through recorded history. Often, the root cause of these wars has plainly been economic while the immediate impulse for them came easily from a threat to religious identity. Religion is a deeply moving source of self-identity and group passions can be aroused most speedily by stirring up religious feelings. Which, for instance, was why a known atheist like Stalin decided, in the fight during the early Forties against the forces of Hitler, to appeal to the religious sentiments of the Soviet people, recalling their religious history, in his effort to rouse their patriotism and to steel their resolve to resist aggression.
But precisely because religion is a source and symbol of group identity, economic conflicts often take the form of a religious struggle. The clearest examples of this today are the Arab-Jewish confrontation and the fight in Northern Ireland between Catholics and Protestants. One group holds that the other is dominating and exploiting them.
The same is true of the Hindu-Muslim quarrels on our own sub-continent. It is the fear of being economically deprived and politically cheated that leads to community conflicts, communal riots and even civil war.
Normally, religion is a noble sentiment, an inspiring source of heroic sacrifice, of self-denial and of serving others, of mercy, peace and goodness. Yet it can be turned quickly into hatred, fanaticism and the most irrational kind of cruelty. This happens because people become intemperate and brutal in their attempt to demonstrate their strident loyalty to their own community or religious denomination.
We in India have thus to be watchful that our deep religious sentiments are not transformed into hatred and vengeance. For, we have not only the Hindu-Muslim rivalry, but also conflicts between Hindus and Tribals, between Hindus and Christians, and so on. Most of these rivalries feed on misunderstandings, willful distortions of one group by another, and, for too often, lack of mutual knowledge and understandings.
The time is now for the various religious communities to practise some ground rules for peaceful coexistence, a kind of Panchsheel for religions. These principles should not only be proclaimed but also be inculcated continuously by the leaders in their followers.
I propose five simple principles as a basis for further deliberation by a representative group of religious leaders and thinkers. These are mutual respect, non-discrimination, dialogue, resolution of conflicts by peaceful means, and co-operation in the service of humanity.
Mutual respect between religions can be engendered by teaching each person to respect other religions as well as his own, never to speak hatefully of them and to learn what is best in each religion. This programme must be introduced in our schools and colleges, as well as into religious teaching schemes. It could also be advanced through public gatherings organised, say once a year, by all the religions together and addressed by their leaders.
Non-discrimination: It is a principle of our secular democracy that no man or woman shall be discriminated against because of his or her religion. This should apply not only to the rights of Harijans but also to those of the adherents of any religion. The minorities of this country fear, rightly or wrongly, that they are often kept out of key posts, or even common jobs, because of their religion. There should be a programme, overseen by a Lokpal, to look into allegations of this kind and to give unbiased verdicts. Natural such a Lokpal would have to be a group of distinguished person representing the various religions.


The principle of non-discrimination would naturally have to apply also to legislation. For example, the Arunachal Pradesh Freedom of Religion Bill (originally called Freedom of indigenous Religion Bill) sought to discriminate between Hinduism and Sikkhism as Indian-born religions on the one hand, and other religions like Islam, Christianity, and Judaism as imported religions on the other. If this principle were carried to its logical conclusion, no religion could go beyond its own national frontiers – including Hinduism. Similarly, the O.P. Tyagi Bill attempts to discriminate against certain religions by subtle devices like defining the “use of force” (which is forbidden for religious conversions) as use or threat to use force, including the threat of divine retribution. True, some West Asian religions do teach about God’s divine judgement, but a secular state cannot legislate against such religions. Hinduism too has the doctrine of Karma which is a sort of divine retribution, and therefore to preach about Karma would be a violation of the Tyagi Bill’s provisions. The principle of non-discrimination demands total Vigilance.
Dialogue or Learning from Each Other: All religions have a tendency to feel self-sufficient. People often think that all that needs to be known in terms of religion is already provided in the Scriptures and other writings of one’s own religion. Experience has shown that when one sets out to learn deeply from other religions, one’s understandings of one’s own religion is transformed and deepened. We need therefore to find ways in which at least the leaders and thinkers of each religion are exposed at depth to the teachings of other religions. It is at this level that dialogue between the various religions becomes essential, especially in the Indian context. One could also organise brief courses in our social and academic institutions where the best teachers of all religions talk to the same group of people.
Resolving Conflicts by Peaceful Means: There should be a national network of religious leaders committed to the ideal of religious and communal harmony, who will be vigilant about communal tensions in various parts of the country. They should take the initiative to engineer a meeting of the religious leaders of the locality as soon as tensions are spotted, in order to prevent a conflict from breaking out. Such panels could be organised on a district basis and closely associated with the Zila Parishad or the district administration. These could also help settle conflicts arising within just one religious group as well as conflicts between different religious groups.
These panels would work on a voluntary basis without remuneration, but will be given the necessary facilities and assistance by the district authorities including the police. Early detection of tension is the essence of this programme. But if the district panel is of sufficiently high calibre it can help in the resolution of long standing conflicts as well.
Inter-religious Cooperation in Service to Community: All religions believe in selfless service to the needy. Why can’t we then move forward to some measure of cooperation in this regard? For example, a few schools, hospitals, and other institutions of service to humanity can be jointly run by different religious groups. Why can’t we put our resources together into some village development project? Ways and means for joint service are worth exploring. It will be recalled that for the Andhra Cyclone Relief or Bengal Flood Relief, various religions acted independently and somewhat competitively. Would it not have been an enduring witness to communal harmony, if we could have had at least a few projects of house-building or relief operations on a cooperative inter-religious basis?
These five principles may need to be supplemented or revised. In any case it will be good to make a start by calling together a meeting of religious leaders to explore possibilities of formulating principles and to begin building our national defences against communal disharmony.
(The Star of the East, Vol. 1, No. 2, April, pp. 29-32)