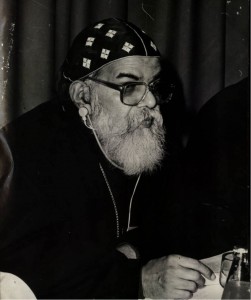 Report Submitted To The Holy Episcopal Synod On April 14, 1975

The word throne is thronos in Greek, kisse in Hebrew, korse in Biblical Aramaic, and kursyo in Syriac.

The Hebrew word kisse is rarely used for the seat of priests. In 1 Sam. 1:9 we see Eli the priest sitting on his throne beside the doorposts of the temple. In Sam. 4:13 Eli sits on his throne by the road, and in 1 Sam. 4:18 he falls from his kisse and dies. The Aramaic word korse is used in the back of Daniel (5:20) for the Royal throne. In Daniel 7:9, the seer sees a vision:

“As I looked, thrones were placed
And one that was ancient of days sat down
His garment white as snow, the hair of his head like pure wool
His throne was burning fire and its wheels burning flame”.

Here in the vision of Daniel, we see the background of the book of Revelation. In Rev. 4:2 we see a throne in heaven which is the seat of God and in 4:4 we see twenty four other thrones set around the throne of God. 24 elders were seated on the 24 thrones (Rev. 4:4), clad in white garments and with a golden crown on the head of each. We can only guess that the 24 elders are the 12 tribal patriarchs of the Old Testament and the 12 Apostles of the New Testament. (Rev. 11 : 6).

“But Jesus said to them : Amen, I say to you, you who have followed me, when the Son of Man is seated on the throne of his glory in the rebirth (palingenesia) , you yourselves shall also sit upon twelve thrones (epidoleka thronois) ruling the twelve tribes of Israel.

“You are those who have continued with me in trials. As my father appointed a Kingdom for me, so do I appoint for you that you may eat and drink at my table in my Kingdom, and sit on thrones judging the twelve tribes of Israel.

The word thronos gradually gave place to the other Greek word for the seat of authority kathedra used in Mt.23:2 for the seat of Moses or the place of the teaching authority of the Mosaic Law(the Pharisees sit in Moses- kathedra).

The episcopal seat becomes a regular feature of all episcopal churches by about the 4th century. St. John Chrysostom speaks about the splendour of the churches in general and particularly of the cities. Every city church has a bishop of its own and every church with a resident bishop has a kathedra or episcopal throne built in the church itself. The word “cathedral” comes from kathedra which in Christian use means a bishop’s chair. A cathedral is not simply a large church, but a church which has the bishop’s throne in it. And every bishop has a throne.

If any bishop without a see shall throw himself upon a vacant church and seize its throne, without (consent of ) full synod, he shall be cast out, even if all the people over whom he has usurped jurisdiction should choose him.

In the Tradition as a whole we do not hear very much of the thrones of particular apostles. Rather apostolic thrones are shared by all the bishops. Every bishop succeeds to the Apostolic throne of the whole college of Apostles.

The fact that St. Peter was in Antioch is not recorded in the book of Acts. The last we see of St. Peter in the New Testament, he is in Caesaria of Palestine and has not even once visited Antioch . The claims of Antioch to have the throne of Peter cannot be sustained by the Bible.

The claims of Rome or Antioch to have the throne of St. Peter have no biblical basis. All such special claims to special apostolic thrones are made on the basis of local or universal tradition and have to be judged on that basis.