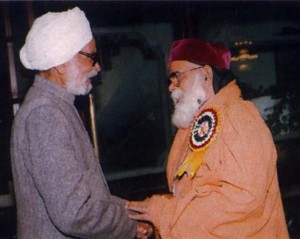 Violence, Insecurity, and injustice grow every passing day. Despair and frustration spread in the conscious minds of the suffering, but also in the unconscious mind of the humanity as a whole.

We are fortunate in India. We have now one person at the helm of affairs in whom the people find it easier to put their trust and to whom they gladly pin their hopes. Rajiv Gandhi has done well in bringing some unity and security to the nation. Neither the problem of Punjab nor that of Assam has been finally resolved, but hope has been kindled. The killing of Sant Longowal has been a terrible blow. Yet something magnificent has been achieved by sheer determination, intelligence and honesty. The last factor – honesty– was the element lacking in our leadership till Rajiv came to power. And there are still circumstances where honesty is the best policy.

Rajiv has not succeeded in bringing a settlement to Sri Lanka, despite all the determination, intelligence and honesty applied to the matter. Neither has he begun to tackle the central problem of our country– that of poverty and injustice, oppression and exploitation. On the contrary, the industrialists and the Transnational Corporations who share among them a large part of the blame for the injustice have been given a freer hand. The economy is throbbing with life, but the poor are not the ones benefiting from it.

The prime minister has a big scheme up his sleeve for revolutionizing the educational system in this country, and to take India to the 21st century with some measure of technological preparedness. In this scheme are included, according to reports, also plans for a nation-wide literacy campaign. The whole scheme should be published soon and be the subject of a national debate. The participation of all sectors of society (bureaucracy and public alike) can galvanize the nation and lead us forward.

Let us hope that the literacy or mass education campaign will be organized to become a gigantic national effort. What is needed is not more criticism but a large positive striving on the part of the whole nation. That will genuinely unite us and lead up forward.