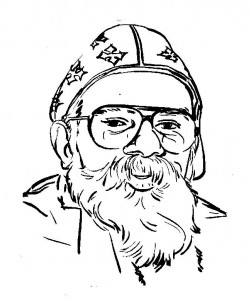 My dear friends at Goshen College,

I was privileged to enjoy your hospitality and fellowship through those rich two weeks from Oct. 1 to 14 this year. So many of you gave me the warmth of your heart and the cheer of your goodness with an unstinting spirit. I was refreshed and am immensely grateful. There are few college campuses left in the world where you can still have such a sense of intense and authentic Christian community. Thank you for fostering it and for being faithful to Christ.

Some of my friends at Goshen have asked me if I have anything to say to the faculty and student body and others who work at the college. Two weeks certainly do not give one enough of an understanding to enable any useful comment. Especially for one like me who still remains an outsider to western culture and refuses to accept its basic premises, while owing much to it.

Ages ago when I was a student at Goshen (1950-52), I was reminded that “nonconformity” was a fundamental biblical, Christian principle. It was also a great central Anabaptist principle. “Do not conform any longer to the pattern of this world, but be transformed by the renewing of your mind. Then you will be able to test and approve what God’s will is – his good, pleasing and perfect will” (Romans 12:2, NIV). I heard the message, but being young, I thought the Mennonites were overdoing the nonconformity part – after all it was only a negative concept. And besides often the nonconformity itself became a kind of conformity: jackets buttoned up to the necks and prayer veils and all that. Of course there were positive elements from the Anabaptist tradition: the refusal to bear arms or fight wars, chiefly.

Today I understand nonconformity in a deeper sense – as a compassionate but resolutely positive witness against the secular civilization built up by the European Enlightenment and spreading like the plague all over the world;

• against its enthronement of critical rationality as the sole source of authority for humanity;

• against its overplaying of the importance of science and technology and of the urban-industrial civilization based on it;

• against its arrogant anthropocentic humanism that has disrupted the life-environment;

• against its managing to marginalize and manipulate 70 percent of the world’s people in order to exploit tnem;

• against its commoditisation of human relations and trivialization of the transcendent;

• against its secularist hubris, which assumes that humanity is supreme and that, there is No One Else around to Whom humanity is accountable;

• against the unjust and dehumanizing social and political – economic institutions this civilization has created that breed greed, violence, terrorism, militarism, oppression, exploitation, injustice, war and growing disruption of the environment; and

• against church structures and leadership that conform to and endorse this unjust establishment.

Such a compassionate witness against the system cannot be effectively made in a position of total isolation from the system: it has to be offered in the marketplace- itself – locally, nationally, regionally, globally. Nonconformity does not mean non-involvement or mere distance. Especially if it is to be compassionate the protest has to be based on a sympathetic understanding of the forces and currents within the system, as well as the sufferings and frustrations of people caught within it. That is hard – to be fully in touch with the world and yet not to be squeezed into its molds, not to take its popularly acclaimed goals for granted, in other words, not to conform.

Maybe this is where Goshen can try harder. Give the young person a better sense of identity by teaching the student all the good things western civilization has achieved, of course. But also help the student discover what the western dominated system is now doing and has done in the past to the marginalized and the underprivileged. Teach how that system was built up and to whose advantage it is run, what forces operate in it, where its power centers are, how it destroys us and them. And let the student and the teacher learn by the witness of fearless, authentic, dynamic nonconformity, under girded by genuine inner transformation through authentic worship (not the strongest point in the Anabaptist tradition, which has to become more community oriented, more symbol oriented in its worship).

The more difficult part is to “prove God’s will,” that is, to show a new social pattern for obedience to God. This pattern is what the world is looking for. It is a pattern for living together – producing and distributing of course – but primarily living and relating, a pattern that makes sense within the exigencies of the time and meets the deepest aspirations of present humanity, while conforming as much as possible to what we now know about the Kingdom of God. That would be real creative Christian pioneering!

I hope I have not overstepped the bounds of courtesy for one who is neither an Anabaptist nor a westerner. God bless you all.

7 thoughts on “Sum and substance”