M. M. Thomas: A Tribute on His 70th Birthday 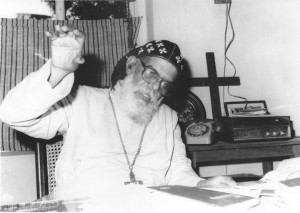 M. M. Thomas
A Tribute on His 70th Birthday

Dr. Paulos Mar Gregorios
I first met M. M. in New York. I think it was 1953. He was spending a year reading at Union Seminary. I was an ordinary B. D. student at Princeton. He was already a Guru, well known in Indian Christian circles, as well as in W.S.C.F. circles. I was totally unknown in India, having left the country in 1947. My few youthful exploits in Ethiopia and the legends attached to them were most likely unknown to M. M. as they were unknown to many Indian Christians until much later.
I went to see him to learn and to be inspired. But I did it in the typical Indian way. I just barged in and introduced myself, a procedure M. M. did not particularly like. He made me to understand clearly that he had come to America to do some reading and did not have much time for idle conversation.
Anyway there was no idle conversation. I left after about 5 minutes, with the satisfaction that I had met the great man face to face.
After I come back to India and became an active, worker in the Student Christian Movement of India, contacts became easier and more frequent. We began sharing platforms and traveling to conferences together. I remember the W.S.C.F. conference in Rangoon. That must have been 30 years ago. I had just joined the staff of Emperor Haile Sellassie, and had come to Burma from Addis Ababa, via India.
We got to Rangoon at about 4 a.m. and since the conference was in a High School, our facilities were limited. M. M. desperately wanted a cup of tea. Harry Daniel was with us as well as our brother from Sri Lanka, whose name now escapes me. Harry taunted us, saying “I am born in Burma. I assure you, if you want a cup of tea, just walk around near the school, and you will find some Malayali pouring out tea.” So that is what we did – the four of us wandering around the school in Rangoon, at about 4.30 a.m. We did not have to walk far before we found a Malayalee tea-shop, and all of us were so pleased, I remember.
In those days, I had a reputation as an interpreter of M. M. Thomas. My mind was much simpler than his. What he expressed in complex technical terminology. I could, inadequately of course, summarise in simpler language. Quite often, after M. M. had spoken in English, I would be asked to summarize in English, or if he spoke in Malayalam, to reformulate it in the same language, for the benefit of the audience.
Our contacts became more frequent after 1961, when he was Moderator of the Department of Church and Society in the W.C.C. and I became W.C.C.’s Associate General Secretary and Director of the Division of Ecumenical Action.
We both had come through the fifties when “nation-building” and Christian contribution to “Asian Revolution” had become the main concerns for thinking Christians in the newly independent countries of Asia. M. M. saw at that time two forces sweeping our nations, along with the surge and emergence of formerly subject peoples – the impact of science and technology on our cultures and ways of living, and the sweeping road-roller of secularisation crushing old ideologies and religions.
He was a “Rapid Social Change’ man, welcoming the acceleration of the pace of social revolution, but warming people not to idealize or idolize any particular ideology or institution. No political order or political party or moral system or ideology was to be indentified with the Kingdom of God. This he had learned from Barth and the Niebuhrs. But he saw Jesus Christ at work in the social revolution. For him Jesus Christ was more at work in what was happening outside the Church than inside it. But there was no room for any utopianism, no ideology of the inevitable success of the revolution, no easy optimism about higher standards of living yielding greater human dignity and freedom.


Many misunderstood M. M. that he was substituting Revelation by Revolution. In fact my colleague on our staff in Geneva, Prof. Hans Heinrich Wolf, the Director of the Ecumenical Institute in Bossey, attacked M. M. in those terms. In fact, however, M. M. never absolutized any Revolution. This was merely a sub-liminal fear of the German psyche stemming from some 19th century experiences, making them terribly scared about the word “Revolution.”
What M. M. stood for was full humanisation of the human race – the development of the awareness of dignity, freedom and responsibility in every human being. So when the Human Rights movement was launched in the middle of the seventies, it was a confirmation of what M. M. stood for – the centrality and priority of the human.
During the period from 1968-1975 when M. M. was Chairman of the Central Committee of the W.C.C., there were a number of attacks on M. M’s theology from good friends like Bishop Lesslie Newbigin, Prof. Wolf and others. Behind these was a fear that M. M. was watering down good old European Christianity and the unspoken western anxiety that the leader­ship of the Christian Ecumenical Movement may not be safe in the hands of non-European Christians like M. M. Thomas and Philip Potter. Is Christianity safe in the hands of the West?
It is a good thing that M. M. is not a systematic theologian. If he were he would have been lost in the labyrinths of methodological precisions and terminological exactitudes which would have made him unreadable.
M. M. is a pious liberal Christian, devotly committed to Jesus Christ, but not to the Christ believed by the Church. It is a Christ about whom he learned much from Marxism and Gandhism, and whose main work is in society rather than in the Church or in the individual soul. Christ is at work in technology, in the Asian Revolution, in all social change everywhere. Christ is also the norm for our participation in all change.
There is no doubt that for many Protestant Christians and others committed to social change. M. M. has been a source of great inspiration and encouragement. I remember George Fermandez, who, if anything is a Roman Catholic, saying in a Delhi meeting over which I was presiding, that he was prepared to fall at M. M.’s feet and kiss his feet. He added also, for my benefit, that he could do that with no other Christian leaders.
M. M. remains a great teacher and a prolific writer, even as he enters his seventies. May God grant him many more years of mental and bodily health and vigour to further clarify the framework of his thought. I would like, personally, to see his thought move and develop in two different directions. First, his ecclesiology, with its sacramental theology, will have to show more clearly the distinctions and relations between the work of Christ and the Holy Spirit in the community of faith on the one hand and in the world as a whole on the other.
Second, in developing the latter aspect, i.e. the work of Christ and the Holy Spirit in the world, he would have to make the Cross on which the world is today hanging a little more clear. That Cross has a North-South beam and an East-West beam. He would still have to work out the relation between the East-west tensions as not just super-power rivalry, but also as a conflict which has its roots in the exploitation and oppression of the many by the few.
M. M. is both an ex-Marxist and an ex-Gandhian, though his actual involvement and deep penetration of Marxism and Gandhism was of somewhat short duration. He is seeking to go beyond both Marxism and Gandhism through his perception of a Cosmic Christ.
To make that Cosmic Christ make sense to Christians and non-Christians alike in the context of today’s world is a big challenge indeed, to him as well as to the rest of us.
I salute M. M. and pay my humble tribute to him. May God guide him and use him for many more years to come.