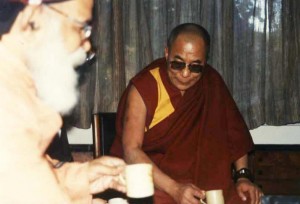 “The eucharist … is the sacrifice of thanksgiving offered up to God, by the Church, in Christ, on behalf of the whole creation. Since the Church is offering it to God, the question of hospitality does not arise at that point. As far as offering communion to those who are not in communion, we do not think of the eucharist as a kind of feast for the invited, to which the Church can hospitably invite some more people. It is the Church which offers itself to God through the body and blood of the Lord Jesus Christ … The question of hospitality does not arise anywhere in that process. The Church is not withholding something from other people, which it then gives to them in a gesture of hospitality. In fact the term hospitality is quite offensive to us in this context, since it implies that those who do not do what some Western churches are now doing are being downright inhospitable …”

These are several quotes from the small collection of the writings of Mar Gregorios called, “Introducing The Orthodox Churches,” published in 1999 by the Mar Gregorios Foundation in Kottayam that indicate his views.

1. “The Orthodox Church in India lives at peace with followers of other religions like Hindus, Muslims, Sikhs, Parsee, Jains, Buddhists, etc. They are not aggressive in trying to convert the others but are prepared to live with them in peace and concord, and with respect. For this reason they are often accused by more aggressive Protestant and Catholics, of being defective or lacking in missionary zeal. “The Orthodox place greater emphasis on the quality of spiritual life, on worshipping God in a fitting way, and in showing love and compassion to all, rather than on evangelism or social activism. They run schools and hospitals, orphanages and homes for the destitute, but not for the sake of attracting converts. It is a silent labour of service in humility which is its own reward.” (p.4, “Introducing the Eastern Churches” original article written in 1976)

2. “The witness of the Orthodox is a quiet one, based more on worship and a holy life of love and service, than on preaching and proselytism. This lack of aggressiveness is often criticized by Western Christians as a lack of missionary fervour. But we know that the aggressive Western missionary movement is intimately linked with the economic, cultural and colonial expansionism of the west, and we would rather not be associated with such an aggressive and institutionalized mission.” (p.15, “How Different is the Eastern Orthodox Church?” original article written in 1991)

3. “The Eucharist is not a mere teaching session for the edification of those who attend. It is the vital link between Creation and God. It is the highest response to the Creation to God…The converse of representing the Creation before the Throne of God would be for the church to represent God before the heart and mind of mankind. The mission of the church thus flows naturally out of worship. Only a church which lives by the rhythm of eucharistic self-dedication to God on behalf of the Creation can truly become the bearer of God’s saving grace for mankind. The rhythm of worship in the matrix of mission.” (p.49, from “Central Concerns of Eastern Orthodox Church” date of original article not given)

4. “The real failure of the Orthodox Church does not appear to lie, at least to the present writer, in her missionary laziness, but rather in her unsanctified, power-hungry, quarrelsome, self-pre-occupied and selfish life in the world. It is not missionary organization that she stands most in need of, but rather evangelical simplicity and eucharistic sanctity in ordinary life, manifesting the love, freedom, and wisdom of God to mankind.” (p. 50, same article)

5. “Eastern orthodox communities in the East have clung to the cultural forms with desperate favour. They have been unable to disentangle their national identity from their Christian faith, and so have tried to hold blindly to many archaic traditions of a national culture quite unnecessary for maintaining a Christian commitment in a new Western culture.” (p.53, same article)

6. “Orthodoxy holds the pure tradition of the ancient undivided Church. But because of its ethnic group egoism remains incapable either of enjoying their rich spiritual heritage or of sharing it with others.” (p54, same article)

7. “We are ahead of almost all the Orthodox Churches of the World in using our own modern vernacular as the liturgical language of the Church. No other Orthodox Church has so far been able to do this to the same extent as we have. “Yet in areas outside Kerala, do we have to insist on Malayalam always? Can we have a Tamil Eucharist at Tadagom or Madras, a Bengali one in Calcutta, and Hindi or English in Delhi and Bombay? This would make it possible for non-Malayalees to enter into the riches of our heritage and thus help us break out of our ethnicism… “I am only saying these in the hope that the Church in Calcutta would show a way to the whole church to break out of its narrow ethnical confinement. The final decision depends upon the Episcopal Synod, the leaders and people of our Church there, and on the boundless grace of God who is always willing to give more than we dare ask for.” (p.61-62, “The Ethnic Character of Orthodoxy” date of original article not given)

“Dialogue with adherents of other religions and of no religions seems to many to imply abandoning the evangelical task of proclaiming Christ. In proclamation, the Christian is the bearer of truth, and the other people the hearers. Europeans seem to like this
role very much. The idea of going to adherents of other religions in order to learn from them seems abhorrent to many European Protestants. They think that such an attitude implies acknowledging some lack in the Revelation of Jesus Christ. As if we had full possession of the Revelation of Jesus Christ, and the ‘non-Christians’ not a touch of it, being immersed in total darkness!

Will Jakarta help Europeans to overcome their fear and insecurity of their faith, so that the world Christian community can open itself to the full riches of humanity? Even from the purely secular perspective of the survival of European civilization, there seems to
be no other way. It was an oriental religion called Christianity that made the Europeans (as distinct from the Mediterranean peoples) capable of civilization. That impact seems now to be dying out. European civilization cannot survive in its dominant form. If it survives at all, it will be in a more modest and humbly open forum. Will the churches show the way? This question is equally important for the Asian Christians who have also shut themselves up in a
ghetto, fearing to open themselves to the experience and insights of their fellow human beings. Unless Europeans open up, Asian Christians will hardly have the courage to do so since the latter are still too often under the spell of European theology and spirituality.

Can Jakarta Assembly, not only in its discussions of the theory but also by its practice, show that Christians can engage in dialogue with others without either compromising their evangelistic vocation or using that dialogue as a mere tool for evangelism? We must never forget that there are at least as many hesitations about dialogue felt by non-Christians who have had plenty of occasion to fear new Christian tactics!”

From: DOES JESUS CHRIST FREE AND UNITE? (MEDITATIONS ON THE WCC FIFTH ASSEMBLY THEME)
[As the Chairman of the Consultative Committee for the Fifth Assembly of WCC, appointed by the Central Committee, Fr. Paul Verghese prepared this article after discussion in that group in February 1974.]

“I still believe that bad theology can do harm, if not immediately, certainly in the long run…
I am inclined to be more reticent and restrained while speaking about the
mysteries of God’s revelation….”

“I know theology is not divinity; to me it is very human, and full of the
contradictions of being human.
Especially when it is one individual’s theology, coming from academic desktop,
not rooted in the life-experience of worshiping and serving communities.
Theological talk is not always edifying. Sometimes, by trivialising the Truth,
theology can be counter-productive for spiritual growth…”

“Very few people have the theological interest, training or background to follow
some of the abstract arguments. Many are satisfied with unexamined conclusions…”

“…God is not a topic for talk or a subject for study. We can sing to God, praise God,
thank God, bow before God, worship God, love God, serve God, repent and return to
God when we have gone astray. We can know God as a person, but cannot know God
as an object of our cognition. God is not the same category as objects in the world…”

“God remains beyond our comprehension, but God has come to us in a human form –
a divine-human person with whom we deal better. That person, Jesus Christ, cannot be
mere instrumentality for our salvation. Christ remains God while being human.
This too is beyond our conceptual or logical comprehension.
In Christ we are seized by God’s incarnate love, and in union with Christ,
we respond to God in faith and gratitude….

“We see light, but then we may soon have to pass through darkness,
towards that Horizon that infinitely beckons us. Even our knowledge has to be
laid aside, as we pass through the cloud of unknowing.
It is not knowledge that helps you advance, but the love that transfigures….”

(Extract from the preface to Mar Gregorios’s book, A HUMAN GOD)

5
”I want to commend to you a good reference book on Christianity in India . 1 know nothing better on that subject than the St. Thomas Christian Encyclopaedia of India .. It is compendious and comprehensive, scholarly and ecumenical. Some of the best scholars in India and abroad have contributed. There are numerous high quality illustrations and maps .. It covers the whole ground – history, culture, customs, divisions, art, architecture, music, parish, life, liturgical vestments, Christian traditional occupations, dance and drama, institutions, statistics – the coverage is remarkable, and the reliability of the information very high … It is a tool worth having for any library, for any scholar interested in the history of Christianity, for anyone interested in understanding India and its religious heritage”

In our Orthodox tradition, we give only secondary importance to intellectual teaching. The most important thing is to participate regularly in the sacramental life of the Church, in worship and in prayer. We grow in divine Wisdom as we separate ourselves from evil and grow more God-like.

The sacramental mysteries of the Church, like Baptism, Mooron (Holy Chrism) and Holy Qurbana are the means by which Christ wants us to grow in Him. Equally important is our life of selfless love and service to our fellow human beings. This study series (this is taken from a book – ed.) can help you to grow closer to Christ, through worship prayer and the sacramental Mysteries and through a life of loving and compassionate service.

As you prayerfully study.., and thereby know Christ more deeply, the Holy Spirit of God will guide you into all truth and into the great mystery of God’s love and wisdom.

May the blessing of God abide upon you as you embark on these studies and continue to grow in Divine Wisdom. May your life become a light amidst the darkness of evil, illuminated by the life-giving light of Christ.

Quoted from the Foreword of “The People of God (Believers in the Indian Orthodox Church)” – an English translation of the Malayalam book “Daivajanam” by Fr. C. C. Cherian