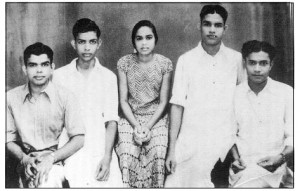 Thadikkal Piely Varghese, the third of the five sons his parents begot, was an intelligent and one of the smartest in the class. His precocious side was noticed early on, when his elder brother’s classmates who were six years senior to him, would bring their English textbooks to Varghese to hear him read those. Master Varghese would oblige often without understanding what most of the words in the textbook meant.

He was small in stature but had a longish head and was nicknamed ‘Kottodithalayan’ or hammerhead. Years later he would reminisce about this aspect in his autobiography- “I find it difficult even today to buy a hat that fits my long head. A 7 1/2 size does not quite fit. I do not think that the size of my head has anything to do with its content, except that at times I do seem to have a swollen head.”

When the boy was in the ninth grade, he participated in a school elocution competition (he had won numerous prizes in elocution and essay competitions) and this time he managed to memorize a particularly bombastic passage from an Indian humor magazine and delivered it as his oration (ofcourse without understanding half the words he pronounced).

The speech was as below:

“In promulgating your esoteric cogitations or articulating your superficial sentimentalities and amicable philosophical or psychological observations, beware of platitudinous ponderosity. Let your extemporaneous descantings and unpremeditated expatiations have intelligibility and veracious vivacity, without rodomontade or parsmical bombast. Sedulously avoid all polysyllabic profundity, pompous prolixity, psittaceous vacuity, ostentatious vapidity and ventriloquy verbosity. Let your conversational communications possess a clarified conciseness, a compact comprehensibility, a coalescent consistency and a concatenated cogency. Eschew all conglomerations of flatulent garrulity, jejune babblement and asinine affectations.”

What catches people’s attention about the Indian Parliamentarian- Mr Shashi Tharoor, is his eloquent vocabulary and his intriguing use of lesser known words in the English language. An article or speech of his would make most Indians reach out for a dictionary. This inevitably led to jokes that he would use complex English words to describe simple tasks.

In modern terms, this school boy had pulled a ‘Shashi Tharoor’ in that competition (obviously that was much before Mr Tharoor was born). His concluding statement explained what the heavy jargons he used in the speech meant:

“In other words, talk plainly, briefly, sensibly and naturally. Say what you mean; mean what you say; and do not use big words.”!!!

The judges were impressed with his diction and no surprises the young boy won the prize as well. That day, His Grace Dr Paulos Mar Gregorios Thirumeni of blessed memory felt “his head became a little more swollen”.

Image- Sitting on extreme left is T.P Varghese (later His Grace Dr Paulos Mar Gregorios Metropolitan of blessed memory) with his brothers and a cousin sister.