An award for Aruna Roy: Made for each other / A. J. Philip 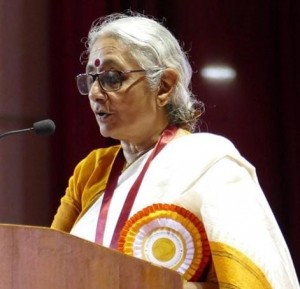 I had two main reasons to attend the Dr. Paulos Mar Gregorios Award 2019 function at the Jawaharlal Nehru Stadium on July 28. One, my own little connections with the late Metropolitan (1922-1996), whom I respected for his sterling character, unorthodox views and unbounded love for humanity. He was a self-made man.

Born in a poor family, he came up the hard way, knowing that his call was to be a shepherd in His vineyard. He was not just a Metropolitan of the Orthodox Church in Delhi. He was the intellectual loadstar of the entire church in India whose influence was felt even on other communities and religious groups. His appeal was truly international.

I first heard him at the Makkankunnu Convention at Pathanamthitta I used to attend in the company of my mother who, despite living for decades in a Marthomite family, never gave up her love for the Orthodox theology and traditions. He was known as Fr Paul Varghese.

That was the time I read about liberation theology that was finding ready acceptance in Latin America. That was also the time Marxist leader EMS Namboothiripad wrote about the Red Priest who had little hesitation in describing Jesus as the Proto Rebel who took the whip against those who made His abode a marketplace.

When I heard Fr Varghese, I wondered whether he was Kerala’s equivalent of the Latin American Red Priest EMS had introduced to his readers and fellow Communists. I found his views unorthodox, as he dwelt upon the emancipating role played by Jesus than on the purity of the sacraments of the church. He was a people’s priest.

It was around this time that I met and became friendly with Fr Thoma. He was a rival to Fr Varghese. Fr Thoma was a traditionalist who questioned the teachings of Fr Varghese from a scriptural and doctrinal point of view. He wrote books to debunk Fr Varghese’s theology. They reminded me of Rudyard Kipling’s famous line, “East is East, and West is West, and never the twain shall meet“.

While Fr Thoma moved away from the church to take up a priestly assignment in Canada, Fr Paul Varghese was consecrated a bishop in 1975, adopting the name Paulos Mar Gregorios. A few months after his consecration, he visited Bhopal and stayed for a few days at the parsonage of the local Orthodox priest.

The priest was a friend and neighbour. He obtained for me an appointment with the Bishop. I was with The Hitavada at that time and I wanted the interview to appear in the Sunday Supplement of the paper.

The bishop was in a leisurely mood and was happy to answer all my questions. He told me that journalism was one profession that appealed to him and he had a lot of questions to ask me about the Emergency and how the people viewed the aberration.
It was one of the most invigorating conversations I had as a journalist. It helped me to understand his theological stand that a church that was not “open to all humanity in truth and love” was no church at all. Small wonder that a person like Prof Omchery NN Pillai found in him a collaborator in many an inter-religious pursuit.

I was present at the FICCI auditorium when the first Award was given to the Dalai Lama, who knew the Metropolitan as a friend, philosopher and guide. I do not know why I could not attend any of the subsequent award functions. This might have been because I was either not invited or I was not in town. India’s milkman Varghese Kurien, Baba Amte, Vaidya Ratnam PK Varrier and Dr Karan Singh were the other recipients of the award, two of whom I had the fortune of interviewing.

Among all the recipients of the award, I consider Ms Aruna Roy as the most deserving of all. I do not have to write much about her, as her life has been like an open book. Born a Tamil, she chose to leave a cushy job in the Indian Administrative Service to take up social service. Former President Pranab Mukherjee who held ministerial positions in the UPA governments formed in 2009 and 2014 recalled her contributions to the drafting of the Right to Information Act. She had vetted every word of the Bill before it was put to the vote in Parliament.

Why I found her the most appropriate person to receive the award was because the Act has been deprived of its effectiveness through an amendment in the law passed by Parliament last week. If the Act was considered pioneering legislation by the rest of the world, it is today a caricature of its glorious past.

She also played a signal role in the enactment of such laws as the right to employment and the right to food. She did this not by writing thunderous articles in newspapers and taking part in television debates where the likes of Arnab Goswami do not let anyone speak the truth.

She did this by living with the people and organising them to demand their rights. The Mazdoor Kisan Shakti Sangathan (MKSS) was the forum that she used to mount her campaign for the laws enumerated above.

She gave a portion of the little time that was allotted to her colleagues at the MKSS to put forth their viewpoints. She did this to inform the audience that whatever she achieved in life was the result of a common pursuit by a large group of people. She believed in the power of the people.

Pranab Mukherjee’s speech helped to underline the fact that he has not yet lost his faith in democracy and secularism. Except in 1984 when the Congress won over 51 percent votes, a majority of the voters never voted for a party or leader.

This was to remind the rulers that they should not ignore the majority which did not vote for them. Mukherjee’s message was loud and clear for the current dispensation.

Shashi Tharoor recalled the speech Dr. Paulos Mar Gregorios made at the World Parliament of Religions in the centenary year of Swami Vivekananda’s famous speech at Boston. Both believed in the concept of religions having mutual respect for one another. Tolerance was a Western concept where the ugly and the dirty were also tolerated.

Tharoor recalled the story of St. Thomas being received on the Kerala coast by a little Jewish girl, whose forefathers had landed in Kerala centuries before the Doubting Thomas set his foot at Kodungalloor. The eclectic traditions of the country were why India was respected in the comity of nations.

Aruna Roy and her companions’ assertion that those who claim to be the majority were the minority in the country found ready resonance among the audience. “It is through sheer brute power that they seek to enforce their agenda”. The award function was a gentle reminder that nothing, including democracy, came free and everything noble had to be defended with one’s full strength lest it should be snatched away by those who believe that might is right.