The Glory and the Burden / Dr. Paulos Mar Gregorios 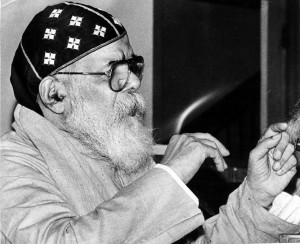 You have pronounced me worthy. I know I am unworthy. God knows that too. Yet He it is who alone can make me worthy to be a Good Shepherd and a blameless High Priest for the little flock, standing in the place of Christ in their midst, serving them, suffering for them, praying for them, willing to lay down my life for them as my Master was for me.

Aaron, the Great High Priest, had his holy vestments or ritual garments prescribed for him by God Himself – gold, blue, and purple and scarlet stuff and fine twined linen (Exodus 28.5), ‘for glory and beauty’ as the Scripture says – a breastpiece, an ephod, a robe, a coat of chequer work, a turban, and a girdle. Why all this glory and beauty? The question is particularly relevant in a country like ours, where the people are poor and poverty and simplicity are the essential marks of the holy man.

But what I want to speak about is the Ephod and the Breastpiece, the Urim and the Thumim, and the Crown mentioned in the Book of Exodus as items of the High Priests’ Vesture.

The Ephod is an upper garment worn by the Jewish Priest – made of gold, blue, purple and scarlet and fine twined linen. We don’t have anything like that today. It had two straps which passed over the shoulders and fastened in front to the Breastplate. Over the strap on the shoulders were two large onyx stones, enclosed in a filigree setting of gold. On these stones were engraved the names of the Twelve Tribes of Israel, six on each. And the breast-plate, made of the same materials as the Ephod, was a square plate made of gold, with blue, purple and scarlet, with fine twined linen. It had twelve precious stones set on it in four rows of three stones to each line. Each stone had the name of one of the Twelve tribes of Israel inscribed on it.

Yes, that is the High Priest. He has the Twelve Tribes of Israel on his shoulders and on his heart. Precious, priceless, gilt-edged, the people are his pride and the source of his beauty and glory. He bears them on his shoulders as a shepherd carries a little lamb on his shoulder. He holds them on his heart for their welfare is his only concern. Responsibility for their welfare of the people, heartfelt, continuous, intercessory prayer for the people – these two are the glory and the beauty of the High Priest. Responsibility for the welfare of the people – that is what the two onyx stones on the shoulders represent, and that is what makes him a Good Shepherd, caring for the people, feeding them, leading them to grass and water, protecting them from the wolf, fighting against all the enemies of the flock, ready to lay down his own life in the struggle to defend his people.

Prayers, Intercession, the offering of Incense twice every day, the offering of the Eucharist – all for the people and their welfare and spiritual growth – this is what Christ, the only Good High Priest does. And as Christ holds His people on His own heart, the High Priest is to hold his people as precious stones on his heart, continuously caring, ceaselessly praying.

Underneath the Breast-plate were two other stones called Urim and Thumim. These two Hebrew words are the motto of my Alm-Mater – one of my many genial mothers – Yale University Urim and Thumim. Light and Rectitude, – Knowledge and Integrity, Wisdom and straightness of character. These are both the necessary requirements for a Good Shepherd. The external glory of the ephod and the breast-plate become a lie, unless they adorn a person with integrity of character, who walks in the light of worldly, moral and spiritual wisdom. He must have a developed capacity to discern the good from the evil and the courage and strength of character necessary to follow the good. Without the Urim and Thumim underneath the breast-plate, the bishop becomes a farce, a joke; a blasphemy. The external glory of the bishop is justified only by the internal wisdom and rectitude.

Aaron had also a crown, a gold band around his cap. On the gold band were inscribed the words “Holy unto the Lord” (Exodus 28:36) “Qodesh leyahweh.” This man and the people he represents are set apart for the Lord – so the High Priest’s crown proclaims. On behalf of the people the High Priest lives this life of unblemished holiness – without evil, in love and mercy, in prayer and compassion, in gentle care and painstaking sacrificial service the High Priest is to be a model of the life dedicated to God. He is holy, as his people are holy.

These then are the essential requirements of the high priest – these four elements:

a) The breast-plate with twelve stones – symbolizing a continuous ministry of love and care and prayer of intercession for the people.

b) the onyx shoulder-bands of the ephod – symbolizing the responsibility for the people, to bear them on his shoulders, to be answerable before God for them.

c) the wisdom and integrity of character – represented by the Urim and Thumim under the breast-plate, hidden, but the reality being there, at the centre of the man’s personality.

d) the head-band which says “Holy to the Lord” symbolizing a life of prayer, a life that is blameless and holy, without which the High Priest is nothing.

The resplendent vestments of the bishop are thus a reminder of the high standards expected of him. This very high standard is the main reason why I asked twelve years ago to be excused from this responsibility. I have too high a notion of the episcopate to covet it for myself. In fact I have even now a dread for my own position and of what the Lord expects from me. I have bowed before God’s call with fear and trembling.

No one can step into this office with anything like confidence in this own powers. The Grace of my Lord and the prayers of my people – these are the two things in which I have confidence. Trusting in His infinite grace, without which I am nothing and in your generous prayers without which I cannot be sustained, I today accept this Cathedra – this throne of God on which He has seated me.

Permit me to say one word about the responsibilities of a bishop also as a civic leader of his people. The bishop cannot afford to be a pure monk, completely detached from the affairs of the world and of the nation. I trust in God to continue in my world-wide ministry to the whole of humanity, in that concern of Christ’s for the welfare of all humankind, but especially for the oppressed, the downtrodden, and the victims of aggression and exploitation. Thus I will continue to be concerned for example for the blacks in Southern Africa, the American Indians in the U.S.A., and the poor of the world especially in Latin America, Africa and Asia, In this country I am committed to the cause of the poor and the exploited masses. Their walfare I regard as the welfare of my country. I stand committed to the cause of justice – justice for the poor and the oppressed. Therefore, I stand for an economy in which the means of production are owned and controlled by the common people – not by a few people nor necessarily by the Government. I stand for a people’s movement, a movement not so much of protest, as of production and distribution, of social education and of cultural creativity without enslavement to consumerism greed and selfishment I stand for a nation that is free from outside control, in which the people can participate in the making of major decisions affecting them, and in which the masses themselves punish and reform the social offenders – the smugglers, the blackmarketers, the givers and takers of bribes, the peddlers of influence the misusers of power.

To accede to this Cathedra in our national capital in some sense also to accept a responsibility to the nation, to be its servant as well. I shall be vigilant where the interests of the people are concerned, and shall seek to speak to the nation about righteousness and peace. I should be at the disposal of the leaders of my people to serve in any cause that is in the interests of the people of this land.

I shall also place myself at the disposal of the wider Christian fellowship in this land – Catholic, Protestant and Orthodox. Whenever the Churches are at the service of the people, I should make myself available to share small part of the joyous burden of that service. I hope also to be able to use my modest gifts as a teacher, in a way that benefits Christians and others in our national Capital.

I hope also to be part of the intellectual or academic community in this city and nation. I am interested not only in national planning as it is now done, but also in re-thinking national goals and in devising new national policies to attain the revised goals. I have an interest in culture – in music and art, in drama and architecture, in painting and sculpture, in philosophy and literary criticism. I want to be part of the cultural life also of this city.

I wish I could, to do justice to all these interests, reside here in this capital city for 12 months in the year. But since I would continue to hold responsibility for the External Affairs of our Church and for Theological Education, I would still have to spend a good share of my time near the Headquarters of our Church in Kottayam. But it is my hope that as time goes on, I can increase the period of my presence and the range of my involvement in the national Capital.

(Address of Dr. Paulos Mar Gregorios on the occasion of his enthronisation as Metropolitan of Delhi, Sunday, July 11, 1976)