Can Our Universities Be Reformed? / Dr. Paulos Mar Gregorios 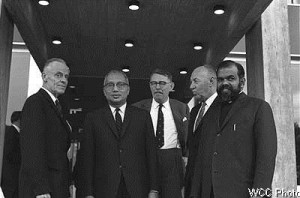 HTML File
The question in the title has been phrased to provoke reflection. Having once served on the Kerala University Senate, may I perhaps claim a right to do some meddling?
One recognises the great achievements of the University Grants Commission, despite many limitations including a somewhat distorted vision. One is less full of admiration for the Kothari Commission Report of two decades ago and its achievements. Even less sanguine are the potential achievements of the current Education Policy Statement, for reasons which follow.
After 25 years of occasional meddling with educational reform, I have become convinced that reform in higher education, in order to be effective, has to be related to a number of other factors over which higher education planners have little control. One can enumerate three such factors:
a. relation to primary and secondary education;
b. relation to forces and means of production; and
c. relation to a radical social revolution and mass education.
Our distorted vision in Higher Education comes from the tendency of the elite still to think of Higher Education solely as economic investment. It should certainly include that Purpose; for augmenting socio~economic production demands higher technology and better management techniques, both of which depend on modern science and a scientific approach to problems. Higher Education should, however, focus also on human socio-cultural creativity. That creativity must be a social revolutionary phenomenon reaching out both to primary and secondary education and also to the masses. It the earlier stages of institutional education neglect socio-cultural and economic creativity, and if the masses do not participate in a total radical movement to transform society towards greater justice and enhanced human dignity, tinkering with higher education divorced from these elements will have little effect.


For those coming today for higher education in our societies, the basic motivation is still personal economic advancement. College students do not think of national economic progress as their motivation. Nor do college teachers and administrators, by and large. Overcoming this hiatus between national goals and personal goals, ie possible only through a pervasive national social movement, geared both to augmenting the social product of society and to overcoming social, cultural and economic imbalances and disparities. In fact it is the responsibility of our political parties to spearhead this movement, rather than to seek economic advantage for individuals and groups by capturing power at the Centre or in the states. Unfortunately however, all our political parties seem to give priority to the latter objective. At least the socialist-oriented political parties in our country should rethink their programme in terms giving priority to social revolution over seeking political office. Only within the context of such a social revolution can higher education find its proper orientation for reform. So long as higher education remains a means for bettering one’s personal economic prospects, it can be reformed only to a very limited degree. This is so even in industrially advanced market economy countries of the west and in Japan.
The implication is that the proper starting point for educational reform, whether higher or lower, is a mass-based social movement. A possible first step is a multi-party national literacy campaign with a broad programme for literacy, health education and social conscientious as well as cooperative socio-economic production for the needs of the masses. Such a campaign will have to avoid some of the errors of the Cultural Revolution in China. It must nevertheless put people in higher education as well as in secondary and primary schools, both teachers and taught, in touch with the life of the masses and with the problems of organised social production and creativity. It must involve trade unions, peasant associations, the bureaucracy (perhaps by a rotation system) and even the army and the police, as well as housewives.
That is a tall order, but there seems to be no shortcut to take which will lead us to a just and creative society and will achieve genuine educational reform in the process. The alternative is to be condemned to perennial frustration and griping.