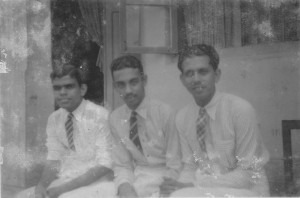 My Dear Doc,
Greetings in His name. I am so sorry to hear that you have not received my previous letter. It was sent through K. in a cover addressed to Mr. Philip. So he has betrayed me. It does’nt matter. I had written only the truth in it.
I had written the details of what he has been trying to do here. I am sure Miss Gundesen has already written to you all about it. May be, she has written to you about the results of our meeting too. He came down from Addis last week, with the Veterinary Doctor, since we had sent him a telegram that the cows were sick. Mr. Stokland asked for a meeting, and Miss Gundesena and I and Degefe attended. In the beginning K’s attitude was that Mr. Stokland had no right to call this meeting, since he thought what he had done was one of his administrative duties and that it did not affect us in any way. When we forcefully brought home to him that he had insulted us by going over our backs and asking the boys not to come to our houses, he was convinced and said that it was his ‘mistake’ and that he was sorry about it. He begged our pardons, but we feel that he did it just because he had to. We asked for an assurance that this will not happen again, which he readily gave us.
I asked him what right he had to stop my boys from coming to my house or any body else going to anybody else’s home for that matter. He repeated his old story that there is public opinion that this was a religious school, and that he had to combat it. He told us how some of the Tillik Sows of the place told him that all his schools were religious schools, and he denied it, without any result whatsoever. He personally believed that there was no religious education being given in the compound and thought that the whole thing was due to the stupidity of the public! He said that he only wanted to change the wrong impression prevalent among the public, and that therefore he thought it necessary to stop all kinds of meetings in the teachers’ houses.
I told him that I was an Orthodox Christian and that nobody could prohibit me from teaching the Bible to the boys. I felt that Miss Gundesen also was not teaching any religion, but only the Bible, but that if he thought it inadvisable he could stop it, but not my class. He replied that this had nothing to do with religion and that it was only a matter of public opinion. He said that he personally had respect for all religions, including the stone-worshippers. I then had to tell him that I thought all this was due to the simple fact that he did not like the Bible. He said that he had studied the Bible, fullstop, semicolon and all, and that everything was in his head. He said that he himself liked to teach the Bible and that we were free to teach to in the class rooms during the morals periods. Mr. Stokland intervened to say that he thought that K was an enemy of the Bible and Christ. He put his hands over his ears as if we were speaking sacrilege. In any case he did not budge from his point, but said that this was not only in Jimma, but all over the province that the Bible classes had to be stopped. He said that he would keep his ears open to see what the public said, and that if they did not change their impressions, we could restart the classes; but the man added the words, …. Then we asked him if this was his own doing, or if he had orders from Addis. He said he was responsible for the province and did not need any orders to do things like this.


The point is this now, Sir, I am asking you to do me a favour, the second time I ask for one. You know that I belong to the Orthodox faith (The Syrian Church of Malabar), which is the same as the Ethiopian Church in every matter of faith. Only the rituals are different. His Majesty knows about my church. I have heard that H.I.M. has received communion from one of our Bishops when he came to this country many years ago. So please seek an interview with him about and me, that I am desirous of opening a Sunday School in this compound. I will see that only things which are not against the Orthodox faith will be taught by me. Explain to him about most of the boys being orphans. Who can be potential crooks if they are not given the required moral education. I can give references about myself from one of our Bishops back home. In Addis Mr. Hafiz Dawood or Mr. Dmitri will be able to speak for me. I know the trend of things in this country, and how difficult a thing I am asking you to do. I know that I myself am taking quite a risk, but I am not anxious about myself, so long as what I do is to the glory of His name.
I would request that your opinion about me and about my character should not stand in the way. It is an unfortunate coincidence of circumstances that has made you misunderstand me in more than one respect. I don’t say that I have always been what I now am. But still, I have never been as bad as you may perhaps think. That does’nt matter in this case.
I will be looking forward with anxiety to your reply. If you think it advisable that I should have an interview with H.I.M., I will be glad to come and do that. I am grateful to you for all that you have done in the past. Do pray over this request of mine, and do what He lays on your heart to do.
My sincere wishes to you for a Blessed and Fruitful New Year. May He help you to overcome your weaknesses and lead you from Victory to Victory.
Yours in Him
T. P. Verghese