What happened to the World Council of Churches? 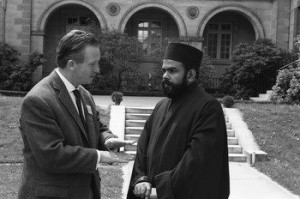 What happened to the World Council of Churches?

Everyone knows that the WCC is no longer what it used to be — not just a body of Christians, but a major voice in the human arena, standing for human unity, justice and peace as well as for the Unity of the Churches. In one sense, it got very close to being humanity’s conscience-keeper, questioning and criticising all that we have listed in the paragraphs above, castigating racism and casteism, exposing the misuse of science- technology for war and profit, questioning the monopoly claims of science to truth, standing up for the homeless poor and the wandering migrants, bringing quick relief to the victims of catastrophe and famine and doing a myriad of other human things.

Today the WCC stands alienated from the Churches, with decreasing economic and moral support even from Christians, incompetent to study issues at depth in order to speak authentically to the conscience of humanity, repeating old clichés and talking the old jargon, turning human beings away by its very inauthenticity and irrelevance. The staff seem to have lost their vision, become both incompetent and out of touch with reality, no longer able to inform, inspire or challenge, either the churches or humanity. It gets on to a few bandwagons, but can no longer be the pioneer it was in the past.

There is not much use analysing what went wrong. Some of us who have for long been insiders, claim to know. The simple fact is that the Ecumenical Movement, whose “Privileged Instrument” the WCC once was, has now no such instrument, though the movement goes on, rudderless and adrift on the turbulent torrent of history.

Will the ‘New Ecumenism’ of the Inter-religious Dialogue be able to take its place as the Conscience-keeper of humanity? The prospects are far from bright.

If Christians are weak and debilitated, the other religions are in worse state despite their sometimes swaggering braggadacio and militant postures. There is a occasional Dalai Lama who is respected and esteemed by all who know him, and is genuinely concerned about humanity as a whole. What other Buddhist can we point to with pride? And who else among all the religious leaders? Martin Luther King was a bright and luminous star, but is gone off the horizon. Mother Teresa, whose work for the abandoned deserves the highest praise, is totally unconcerned about war and injustice, about the unity of humanity, about human health, education and culture. The Bishop of Rome, an acknowledged and powerful religious leader of the West, from the very beginning of his reign in 1979, despite his dramatic showmanship and impressive theatricity, revealed himself as too small-minded to win universal acclaim such as his predecessor John XXIII did. After the days of Sri Ramakrishna, Sri Aurobindo and Sri Ramana Maharshi, as well as, of course, Mahatma Gandhi, the great Hindu tradition has not thrown up any leader of a universal spirit and high calibre. Who from the great community of World Islam can we mention as a great leader of humanity?

People seldom realize how impoverished our religious leadership is in the world today. A God-denying world civilisation has managed to lower the standards of religious leadership as well, since apart from its political use, what value does religion have in a secularised society, except to be marginalised, privatised, and despised by the savants? Too often those who are not competent to make a mark in secular life, resort to religion as a means of self-aggrandisement and become religious leaders!

And yet some of us hold on to the inter-religious movement in the hope that the situation may change after there is global economic collapse and people may finally realize that godlessness is our fundamental problem. Will the WCC be there as a ray of hope when that happens? Most unlikely, alas!

6 thoughts on “What happened to the World Council of Churches?”