The Nature of the Church: Parables of the Kingdom / Dr. Paulos Mar Gregorios 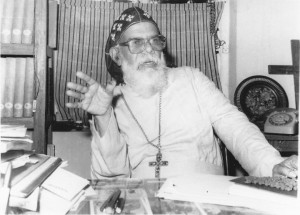 The Nature of the Church: Parables of the Kingdom

The following excerpts are taken from the first of three meditations given by Father Verghese at the 10th National Assembly of United Church Women, Kansas City, Missouri, October 5-9, 1964.

No single picture can express the task of the church in the world. Every parable and metaphor brings out a different aspect of the ministry of the laity.
Each of the seven parables (Mathew 13:18-51) has one or two points which seem relevant.

There will always be a small church within the whole which is truly the good seed, but even within that small group of people who are absolutely committed, different qualities of all humanity will creep in. Some will bear fruit, some 30 – fold, some 60 – fold, and 100 – fold.

We cannot expect the people of the church as a whole to be effective witnesses, effective shepherds who lay down their lives for the world. Within the church community will be a group of people who on behalf of their fellow citizens and brothers – but without any sense of being ‘holier than thou’’, without any sense of self – congratulation, without any cliquishness – must develop and devise a program and work together and suffer together and serve together on behalf of the whole church. One thing to remember from the parable of the sower is that not all can bear fruit. Those given the special grace to bear fruit must not think themselves to be superior to others who do not bear fruit in the church, but they must come together – they must.

The second parable we consider is the parable of the wheat and the tares (Mathew 13:24 – 30). It applies to history. Let us not think that the world will one day become a beautiful place where all men are united, where righteousness will flow like living springs, where there will be peace and justice.

No, the field of the world is a place where the wheat and the tares go together, and it will be so until the end of the age. It is inevitable that justice, as well as goodness, flourishes in the world. Evil will also flourish. The two will go side by side until the last day. Let us not be naive or optimistic. In history, the whole world should become a place where justice and peace and righteousness and love abide, but we must expect evil not only to flourish, but to be powerful, even sometimes to vanquish the good. Yet the good is not ultimately vanquished.

The tremendous courage of the Christian is that, even with failure as the only fruit of his labor, he is not frustrated because in his faith he knows failure is the means through which God brings out his glory. Therefore the people of the Christian community in each locality must have the courage to go and do that which is good, even when it does not seem effective. Even injustice and evil are able to suppress them, and sometimes, too, humiliate them. We must expect no less. We cannot work for social justice and be heroes at the same time. We must work, we must sacrifice, we must even fail in order that the glory of God may be revealed. That is the great lesson for us to learn from the seed parable of the wheat and the tares.

The third parable of the great lesson is that of the mustard seed (Mathew 13:31-32). The church is sometimes charged with being irrelevant, small, insignificant, powerless, disorganized, disunited, but sometimes that is the calling of the church. The church is never allowed to triumph without at the same time being tempted to hypocrisy. Whenever the church becomes so relevant that everybody thanks God for the church, it is in greatest torment of temptation. The good kingdom of God is like a grain of mustard seed in size: taking the smallest of all seeds. Through that powerless and weak seed, God brings to birth this tree, this object upon which the birds of the air can come to nest.

That is the way the gospels work, not in power and glory, and not limited to the ministry, but in the smallest and most insignificant of us. Whether the consequences will be known 100 years from now, we must work at our faith, knowing that in the calling of the Church not all will be the great saviors of the world in open glory.

Then the seven parables say to us that the Church will call all sorts of fish (Mathew 13:47-50). Sometimes it seems we have peculiar and queer fish in the Church. This particular net seems to have a special affinity to attract the queer and peculiar… Yet, this is the way the Church should be. The Church should not be a place where everybody is so good and so sweet and so lovely that everything is rosy. That is not the calling of the Church. The Church’s hidden glory requires that a large number of people, like me, and like Him (I won’t say all of you) should be different. We must not despise each other because we are queer and peculiar. We never know which one God chooses for his own purposes, but let us all remain in the faith.

Then, finally, the two other parables, five and six (Mathew 13:44 – 45). Both the treasure hidden in the field and in the pearl prove the same points. In a sense it is a little bit dishonest. It is not as if you discovered a treasure in somebody else’s field. You go and cover it up, and then you go and buy it. It is a shrewd bit of business for the Lord. Our Lord was not talking about the effect of that.

When the layman or the laywoman is called to the ministry of the Christian, he says, “How much of my time will it take? I have too limited time. I have my bridge club, my golf club, my social work, and a few other things. I will serve the Church if it doesn’t take much of my time.” I compare it to a ministry.

The kingdom does not approve that kind of taking it lightly. The kingdom demands every bit, every ounce of our energy, every ounce of our time and our wealth and all our strength. It is not simply a giving of time to God, a part of our time toward Christian work. The kingdom demands nothing less than that you sell everything you have and buy this hidden treasure, that you sell all your little pearls and trinkets and buy one pearl of great price. It is only that kind of commitment to the kingdom that can bear fruit, not one that gradually grants the Church a little bit of your free time.

The ministry to which we are all called requires the whole of our being, the whole of our time, everything that we have. Only when men and women all over the world are prepared to lay down their whole lives, their precious time, their influence, their power, their wealth, their minds, their knowledge, their professions, all that they have, only then will the Church genuinely begin to bear fruit and fulfill the ministry, the glorious ministry to which Christ has called us.

Prayer: Almighty God, who in thy mysterious wisdom has planted us in the field of this world, grant us faith that we may dedicate all that we are and all that we have that thy name may be made known better to the world through Jesus Christ, our Lord. Amen.

9 thoughts on “The Nature of the Church: Parables of the Kingdom / Dr. Paulos Mar Gregorios”