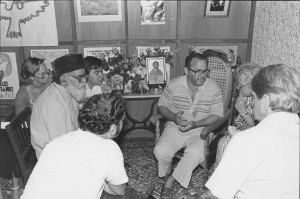 Most Indians have not even heard about an Eastern form of Christianity. They know mainly the two Western forms: Protestant and Roman Catholic. The average educated Indian, if he is wellread, knows the different forms and names of Protestantism: Methodist, Anglican, Presbyterian, Lutheran, Baptist, Congregational, Church of South India, Church of North India and so on. And he knows that all these forms of Christianity have come from Europe, along with the colonialist – imperialist movements of the 15th century and afterwards.

But he has seldom heard about an eastern Christian Church. Nor has he most likely encountered one in India. It comes to him as a surprise therefore to learn that, as Nehru once said, Christianity is older in India than in most parts of Europe. It is a fact that the Christian Church has existed in India ever since the first century. When one of the original Twelve Apostles of Christ, St. Thomas came to India (in 52 A.D.) and established Churches here.

This ancient Eastern Church continues to this day in India, though the coming of the Western missionaries has nearly destroyed this ancient church and broken it up into several factins.

What is left in the old Eastern Christian tradition in India is the Orthodox Church, sometimes called the Syrian Orthodox Church, because Syriac was once the language of worship of this Church. It is rather small, just 15 lakhs of members, which is only 10% of the total number of Christians in this country.

Their significance should not be evaluated in terms of size alone. They are cultured, fully Indian, and have produced outstanding leaders, like the deputy Leader of the Congress Parliamentary Party, Mr. C. M. Stephen, and the Foreign Trade Commissioner, Dr. P. C. Alexander, Mr. A. M. Thomas, Chairman of the National Khadi Board and many such national leaders.

In what way are they different from the western Churches? There are some easily recognizable external differences. Their priests usually are bearded and wear a black cap. Their Bishops can be recognized by a special head-dress with one large cross (for Christ) and 12 smaller crosses (for the 12 apostles) embroidered on it. Their worship is more colourful than that of the Western
Churches.

In administrative structure, the Indian Church is not subordinate to or dependent upon any Church or group outside India. They have their own supreme Head in India – His Holiness Catholicos Mar Thoma Baselius Mathew II, who resides in Kottayam, Kerala. The Indian Church is divided into dioceses, and there is an Indian Bishop or Metropolitan in charge of each diocese. The Metropolitans, along with the Catholicos constitute the Holy Synod, which is the supreme administrative body of the Church.

The differences in faith are more difficult to explain to the outsider. The main difference between Roman Catholics and the Orthodox is that the latter do not acknowledge the authority of the Roman Pope. Roman Catholics priests are unmarried, Orthodox priests can be married, unless they are monks (Orthodox bishops are always unmarried). The Roman Catholic Church follows the ways of thinking of certain Western thinkers like Augustine, Thomas Aquinas, Ignatius Loyola etc. The Eastern Orthodox do not accept these teachers. They follow the teachings of the ancient Fathers (gurus) who lived before the Church was divided in the 5th century. Some of their teachers are St. Basil, St. Athanasius, St. Cyril, St. Gregory Nazianzen, St. Gregory of Nyssa, St. Severus etc. The differences between these two groups of teachers are subtle but significant. There are very difficult points like whether the Holy Spirit proceeds from the Father alone or from the Father and Son; these are not easily comprehensible except for the trained theologian. On matters like sacraments, grace, sin, Holy Spirit also there are some significant differences of opinion between Roman Catholics and Eastern Orthodox.

With the Protestants, the differences are even greater. The Orthodox, do not believe that the Bible is the only authority for the Christian teaching. The whole tradition of the Church, which not only includes the Bible, but also the teachings of the ancient Fathers and the decisions of the Councils, is authoritative for them. They do not believe, as some Protestants do, that the Church is composed of the believers coming together. They believe that the Church is one in all ages and all places, and that all those who have ever believed in Christ (even those, who lived before Christ) are even now members of the Church, and that the Christians now living from only a small part of the Church. The Orthodox, do not regard the bishop, or his representative the priest, as merely someone commissioned to preach the word and administer the sacraments. The bishop or priest is a visible manifestation of Christ Himself and they revere Him accordingly. The Orthodox also give greater importance to the sacraments like Baptism, the Holy Anointing, Confession, Eucharist (Mass), Ordination of priests, the Sacrament of matrimony etc. Protestants have fewer sacraments (mainly Baptism and Lord’s Supper) and do not give the same importance to these as the Orthodox do.

The forms of worship of the Orthodox are entirely Eastern, brought form Palestine and Syria, and indigenized in India through centuries of use. The Protestants and Roman Catholics are still trying to emancipate themselves from their recently imported Western heritage.

The main tenant of the Orthodox faith is the belief that salvation is by being united with Christ who is Isvara incarnate. By being united with Him, we are to grow into God’s image by becoming more and more god-like in character, in love, in goodness and in wisdom. This process of transformation is called theosis or divinisation. This is very close to certain schools of Hindu thinking about salvation by yoga or union with Brahama.

The Orthodox Church in India lives at peace with followers of other religions like Hindus, Muslims, Sikhs, Parsees, Jains, Buddhists etc. They are not aggressive in trying to convert the others, but are prepared to live with them in peace and concord, and with respect. For this reason they are often accused by more aggressive Protestant and Catholics, of being defective or lacking in missionary Zeal.

The Orthodox place greater emphasis on the quality of spiritual life, on worshipping God in a fitting way, and in showing love and compassion to all, rather than on evangelism or social activism. They run schools and hospitals, orphanages and homes for the destitute, but not for the sake of attracting converts. It is a silent labour of service in humility, which is its own reward.

8 thoughts on “Introducing the Eastern Churches”