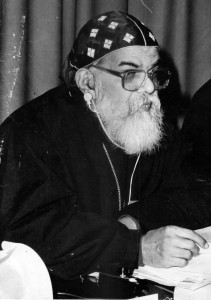 In the Old Testament, Salvation is closely linked, not to a particular personal experience of inner liberation or mukti; but rather to two concepts – righteousness or justice and Peace.

The Hebrew word Tsedeq or its Greek equivalent dikaiosune can be translated rightness, righteousness or justice. And it is always closely related to the concept of shalom or peace, which means literally a social situation where human beings flourish in justice.

Christians have not only been tempted to take both righteousness and peace in an indivisualistic and personalistic sense, but have often failed to see the connection between the two. They have been brought up in an economy which emphasizes “free enterprise” and the “individual”, and have drawn christianity also into that kind of a framework.

It is perhaps partly due to this personalisation and individualisation of peace and justice, and partly due to ignorance about their mutual relation, that many people who claim that they are Christians, can as rulers of a so-called Christian State, do the most atrocious social crimes against justice and peace. One of the taunts frequently flung in the face of Indian Christians is the fact that all the great World Wars have been started and pursued by so-called christian nations, and the so-called Christian nations are ………….. the primary criminals responsible for the pattern of unjust economic relations in the world today.

The present writer has been told by a British civil servant taking part in an UNCTAD conference, that as a Christian he knew that his government’s refusal to offer a just price for the commodities exported from the developing countries was against his faith, but that he was not in the conference as a Christian, only as a representative of the British government. He told me also that if the British Government’s policy had to be changed, I would have to appeal to the Christian brothers and sisters in Britain and through them to the people as a whole, and not to a single representative of the government, however convinced he personally may be about the rightness or wrongness of government policy.

The point is that this British Civil servant did not feel responsible, as a Christian, for what his government was doing. This, I submit, is a wrong kind of Christianity, which feels that one can maintain personal righteousness when the nation as a whole was doing wrong.

The Psalmist says:
Surely His Salvation is close to His worshippers
So that glory may dwell in our land;
Faithful love (hesed) and Truthfulness (emeth) have met;
Justice (tsedeq) and peace (shalom) have kissed.
As truthfulness sprouts from the land
Then justic shall come down from heaven
(Ps 85:10-11)

This close connection between salvation (Yeshuah) social integrity (emeth), social concern (hesed), social justice (tsedeq) and social welfare (shalom) was forgotten by Christians in more recent times, when the corporate aspect of salvation was eclipsed by an individualistic – personalistic understanding of it.
The New Testament also has been so mis-understood. Jesus himself was very clear when he said:

The Kingdom of God is manifested in history through a society where justice and truth and peace flourish. The tragedy of Christianity has been the ignoring of this primary command to seek as the highest priority that quality of life for all, which is designated by the expression Kingdom of God or Kingdom of Heaven. To hunger and thirst for justice and to be persecuted for its sake is the primary vocation of the Christian – not to seek to save one’s own soul, for this latter means losing your soul, (Mt.16:25) just as seeking to gain the wealth of the world is also to lose one’s own soul (Mt. 16:26).

This is why, James, the first Bishop of Jerusalem and the first head of the Church after Jesus’ death, can say:
The wisdorn that comes from above (anothen sophia)
is first pure, then peaceful,
Upholding, convincing
Full of compassion and of fruits of good
Neither partial nor hypocritical
For the fruit of justice is sown in peace
By those who work for peace (James 3:17-18).

This is a very ancient part of spiritual wisdom, that to work for Justice is actually to work for peace and for the salvation of all. For St. James goes on immediately to ask:
“Where do they come from –
These wars and battles among you?
Is it not from this,
That there is a war of greed and lust
Going on in your organs?
You have greed, and you do’nt get;
So you murder and are jealous
Still you don’t get, for you don’t ask;
So you fight and go to war
When you ask, you don’t get
Because your very asking is evil,
For all you want is to waste
What you get on your cupidity” (James 4:1-3)

War comes from greed, from unjust demands by the mighty; when the demands of a nation are just und fair, the refusal of those demands is also unjust and can lead to war.

There is no doubt about the Christian teaching – justice is the solid basis on which peace can be built, and without some justice, peace can never be secure. And the search for peace with justice is a first priority for christians.
Some facts

In actual fact, behind the restless war hysteria today, the major factor is economic injustice, the greed of certain companies and groups, and the lack of compassion and care for the suffering and the needy.

1. The more than 150 wars fought by humanity since the second world war ended in 1945, have benefited only the manufacturing and trading companies for arms manufacture and arms trade; wars are often fomented in order to promote the sale of weapons to both sides;

2. Though it is bad economics, many groups in political power believe that the best way to keep the industrial system going through expansion of markets is to spend on war. This is bad economics, because while investment in military production may produce some results in the short run, since military production does not increase human consumption, its cumulative impact on the economy can be disastrous, as Israel is now experiencing. In the long run the amount now spent on military production, if spent on producing commodities and services useful for civilians, can create at least 50% more jobs, and generally increase the standard of living of the people. This is where truth and Wisdom, justice and peace meet.

3. The military budgets of the nations of the world today come to a total of about $ 600 billion. It may go up in the coming years. 10% of this annual expenditure, i.e. 60 billion dollars invested in useful production in the developing countries and managed in the interest of the people, can create enough jobs and enough commodities and services, to wipe out poverty and ignorance and substantially reduce ill health and the death rate in just ten years. This is a recognized fact. The political will, however, is lacking. The political will is now largely controlled by groups, including mass media, whose primary interest is in preserving their unjust privileges and not in the elimination of poverty and injustice from the whole world.
The total military expenditure of humanity is about 6% of our total production in the world. 10% of that 6% is only 0.6% of the total. We are unable to spare that much for the sake of the poor and of the victims of injustice. Behind this lies a basic lack of compassion on the part of the privileged classes everywhere including India.